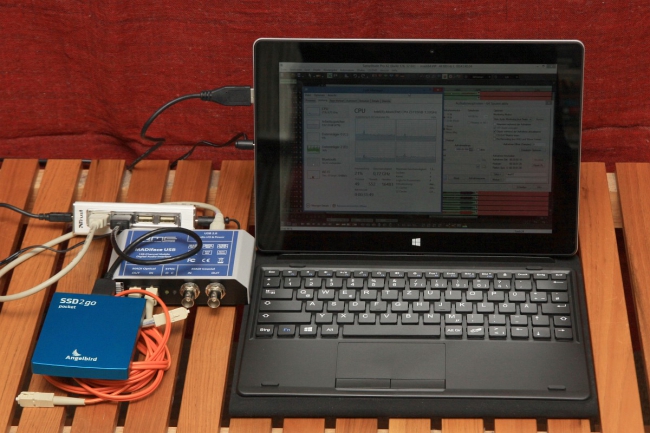 Further to my test of an external SSD, I tried the smallest possible 64-channel recording setup I could think of (without preamps and converters, admittedly) after having come across the Trekstor SurfTab Wintron 10.1 tablet computer, which runs a full-fledged Win 8.1 32 Bit. Prices start from about € 200 in Germany, although I got mine for only 170, including the somewhat mediocre keyboard/touchpad combo. This is the 3G version, there is a Wifi only version as well, which is in fact a bit thicker... The tablet has got one full-size USB 2.0 port, to which I connected a simple el-cheapo USB hub with external 5V power, with hosted both the Babyface USB and the aforementioned external SSD. I did so after having successfully tried it with a Babyface connected directly to the computer, which was running on battery power.

On to a test with the Madiface USB, where initially, the Trekstor's internal 32 GB disk drive (of which about 22 GB remain free) performed so-so, but was unable to record 64 channels. The demo version of Samplitude Pro X2 reported Lost ASIO Buffers (but there were no USB errors in the USB Settings Dialog). 24 channels were no problem, though.
Unlike my positive results with SD cards for Durec with the UFX, the Tablet's internal SDHC card slot would not do more than 10 MB/s writing, even with a fast UHS-1 SDXC card. Samplitude barely managed the 24 channels, with the disk load occasionally going to 100% and one interruption of the recording due to disk overload. Things went a bit better without Samplitude updating the objects during the recording.

The external SSD (much like current fast USB hard drives, I would assume) flawlessly records 64 channels at a disk load below 50%, even while the Tablet PC is running a Teamviewer session (at high quality settings and with audio transfer) across WiFi, and with two devices competing for USB bandwidth on the hub. Audio signal was provided by Media Player playing back an mp3 file off the C drive, which was then split to all outputs in the Madiface's matrix and looped with a cable. I could listen to the stereo audio signal across the LAN on another PC running the Teamviewer client without any glitches, even while 64 channels were being recorded.

Haven't looked at DPC values or so, as there is no obvious issue. Without Teamviewer, the CPU happily reduces clock rate to below half the nominal rate without any apparent issues. All performance meters are very stable throughout. I did not test low latencies, as these are not really required during multichannel recordings. Therefore, I have also not tested simultaneous playback and recording so far, but will do.

The Trekstor also performed well while playing an 8-channel project with some reverb thrown in to bring the CPu load to about 68%. I don't expect this setup to be a killer for low-latency MIDI/VST performance, so I have not really tested that yet.

The device complained about insufficient USB resources when I connected the Madiface XT through the hub, not sure why, despite the XT being manually set to USB 2 mode. The device manager states the presence of an "Intel USB 3.0 eXtensible-Hostcontroller - 0100", although the external connection seems to be USB 2.0 only. Transfer rates of the USB 3 based SSD drive remain below 40 MB/s when connected directly.

Will also test it with the FF UFX, but don't expect any issues.
The setup pictured here is perhaps a bit finicky to be used with full confidence for a major once-in-a-lifetime recording, and I have not yet tested long-term stability over the course of many hours, but it seems like a nice way of reducing weight on mobile recording assignments.