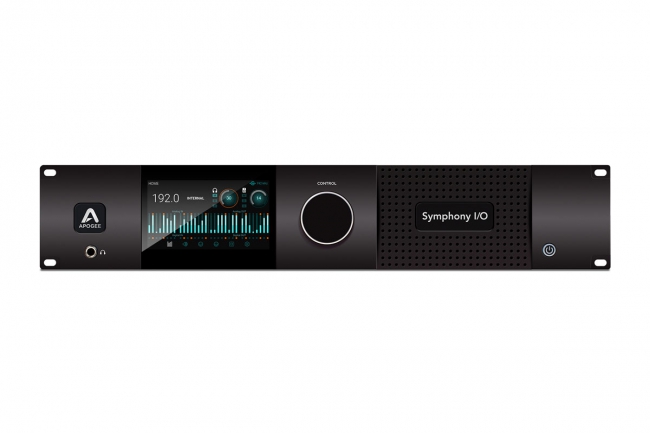 There is a Symphony I/O Mk II solution for everyone; the home studio, project studio, commercial recording studio and scoring stage. Choose from four base I/O configurations, 2×6, 8×8, 16×16, or 8×8 with 8 mic preamps and easily expand as your studio grows. With two module slots and the capacity for up to 32 inputs and outputs of A/D & D/A conversion per unit, Symphony I/O Mk II offers the best per-channel value of any interface in its category.

Apogee engineers have made it their passion to improve every new flagship product by using the latest in electrical components and designing optimized circuitry that often exceeds the expectations of the component manufacturer. This is the Apogee Advantage. Symphony I/O Mk II is the culmination of this 30 year commitment and raises the bar on all Apogee products before it with even better audio clarity and sonic transparency. In fact, when equipped with either the new 8×8 or 16×16 Mk II I/O modules, Symphony I/O Mk II outperforms all other multi-channel audio interfaces available for Pro Tools HD or Thunderbolt based systems, making it the flagship audio interface for the entire professional audio industry and the obvious choice for countless GRAMMY winning artists, producers, songwriters and engineers.

THUNDERBOLT
For connecting to a Thunderbolt equipped Mac running Logic Pro X or any other Core Audio compatible DAW. Up to 32 simultaneous inputs and outputs per unit/system and latency as low as 1.35 ms in Logic Pro X (96kHz / 32 buffer).

THE MAGIC IS IN THE MODULES

The I/O Modules are the sound and soul of Symphony I/O Mk II, and represent over 30 years of Apogee R&D and design excellence. These powerful Modules deliver Apogee’s core competency: superior sounding digital audio recording. With 3 available I/O Modules and an 8 channel mic preamp module, you can choose from base configurations or expand to grow your studio’s capabilities.

Symphony’s I/O modules are designed to future-proof your investment in flagship Apogee sound quality. If you own an original Symphony I/O, the Symphony I/O Mk II chassis can increase the longevity of your system by offering backwards compatibility with first generation 2×6, 8×8, 16×16 and 8 channel mic preamp I/O modules.

Symphony I/O Mk II’s new option card feature will future proof your investment and your studio. Working in Pro Tools HD now? Thinking about going Native with Thunderbolt or setting up an audio over ethernet network? The Option card slot offers flexibility for the present and the future, as new platforms develop and audio recording workflows evolve.