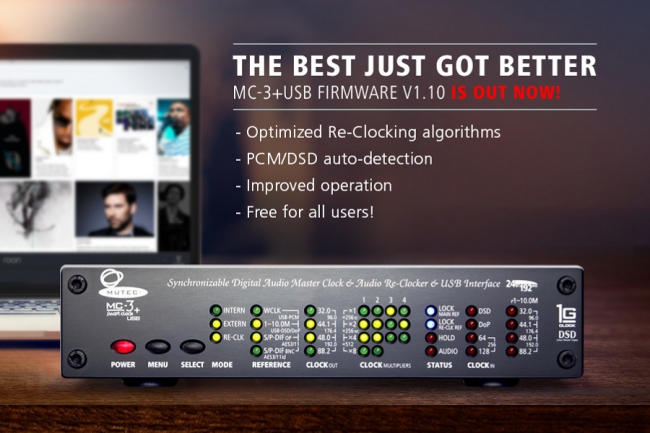 Since its introduction last November, MUTEC has carefully listened to the feedback from customers and the distribution network sparking several ideas for improvements. The new firmware V1.10 will not only introduce several functional improvements, it also presents a significant step-up for the already exceptional sound performance of the MC-3+USB. Furthermore, the update will be free to all users and is ready to be installed on their own at home or at the studio.

One of the most significant functional improvements and most requested feature of the firmware V1.10 is the automatic detection of DSD and PCM streams when using the MC-3+USB for audiophile computer audio playback via USB. MUTEC CEO Christian Peters comments: "Convenience is key for our high-end consumer audio customers and having to switch modes depending on the source file when playing back a mixed format playlist for example was a major nuisance." From now on, the user simply has to select the USB input from the reference menu (all top three LEDs now illuminate) and the MC-3+USB will automatically adapt to PCM streams with up to 192 kHz sampling rate and DSD/DoP (DSD256 and DoP128 respectively).

Even more significant than this functional change are the sonic improvements that the new firmware introduces: "Our development engineers have painstakingly tweaked the DDS algorithms under the hood yielding a new level of sound quality. This is an achievement we're particularly proud of and that all users will benefit from.", explains Christian Peters.

To ensure that these results hold true in the trenches, the firmware V1.10 has been thoroughly betatested in the field and users are excited about the results:

"So (deep breath), does it work? The simple answer is yes, and with every single device with which I’ve tested it. In the past few months I’ve had through my room a bewildering variety of DACs, from those built into a number of integrated amplifiers all the way up to big-ticket non-oversampling audiophile models, and in every case the MUTEC has brought sonic gains which are immediately apparent, from cleaner detail in even the subtlest nuances of recordings through to a tighter sense of rhythm and timing, and - my personal favourite - enhanced presence." - Andrew Everard

"Specifically, I'd like to stress that the increased resolution of complex program material such as choirs and orchestras at high volume is the most important improvement for me - regardless of the source device. Conclusion: this update elevates the MC-3+USB to being an even more efficient digital audio component. Thank you very much!" - Willem Zimpel

The update further strengthens the MC-3+USB's position as one of the leading DDC (digital-to-digital) USB interfaces and re-clocking devices. Just this last May, US-based audiophile expert Kevin O'Brien already called the MC-3+USB a "no-brainer as it surpasses all the others in the performance AND convenience" in this USB converter shootout.

The firmware release package will contain several update files and a comprehensive guide taking the user through the process step by step. The update will be made available via MUTEC's website as a zip-archive download. At the moment, the update is limited to Windows users only, but a Mac version of the update is expected to follow soon.